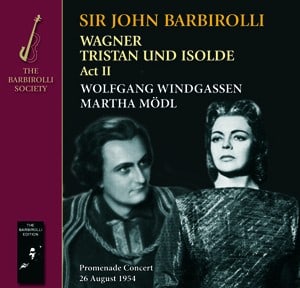 Although the discography of Sir John Barbirolli is (today, thankfully) both remarkably large and wide-ranging, his extensive work in opera at various periods in his life is less than fully represented. So when a rare surviving recording of Barbirolli conducting a live performance of Act II from Wagner’s Tristan und Isolde comes to light, and is found to be sonically good enough to be released, we must be grateful, first for the recording’s survival and secondly for the technical skill which has made aesthetic appreciation of the performance possible today.

However, the committed listener cannot but be disappointed that the tape of this performance at the 1954 Henry Wood Promenade season of Act II from Tristan und Isolde, and taken from the BBC transmission, is not complete, but rather than let the surviving tapes languish in silence in a vault, with Scene 3 incomplete, we have decided to release the performance. Although the off-air recording quality of the original tape is not of the best quality, it is still more than good enough to appreciate the undoubted musical qualities of the performance. With Mödl and Windgassen truly at the height of their considerable powers, and with Barbirolli on the podium, the result is a piece of treasureable music-making from singers brought up in the correct Germanic tradition in this music, in the hands of a great conductor performing before arguably the most appreciative audience in the world.

As a bonus, the CD also includes Barbirolli conducting the Prelude and Liebestod from Tristan und Isolde with the New York Philharmonic Orchestra, a recording from Carnegie Hall, New York in 1938.