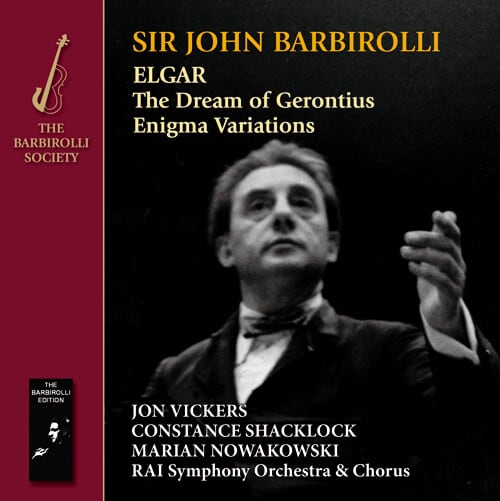 In this live recording from Rome in 1957, Barbirolli inspired his three international soloists – the Canadian-born Jon Vickers (Gerontius), the British contralto Constance Shacklock (the Angel), and the Polish bass Marian Nowakowski (the Priest and Angel of Agony), as well as his Italian chorus and orchestra, to come together in a moving and intense account of The Dream of Gerontius.

The RAI choir is very good, singing with firm sound and the essence of Newman’s text is fully conveyed. The depth of feeling is also both compelling and very moving – not least for Jon Vickers’ Gerontius – one can almost sense his delivery of the eponymous solo part adds a further layer of intensity to the choral singing – each member of the choir must have been individually inspired by him through taking part in this performance, sympathetic to the inherent Catholicism of Newman’s text.

In November 1960, Barbirolli was back in Italy, in Turin, for a performance of Elgar’s Enigma Variations. This score would not have been quite the unknown quantity that The Dream of Gerontius would have been in Rome three years earlier. The Turin orchestra was a very good one – it was known to UK record collectors through Decca recordings – and what we have claimed as the ‘internationalism’ of Elgar’s work was familiar to the greatest conductors of the age. It is clear, from the opening statement of the ‘Edward Elgar’ theme, that the Turin orchestra were with Barbirolli all the way, from the delicacy of the H.D.S.-P. and Dorabella variations to the energy of G.R.S. the immortal nobility of ‘Nimrod’, and the crowning glory of the self-portrait ‘EDU’. The result is a finely coherent performance, an incomparable interpretation of a genuine international masterpiece.

“… Elgar’s The Dream of Gerontius… a truly treasurable document, largely on account of Jon Vickers as Gerontius, a bold heroic assumption of the role, vocally imposing and charged with feeling… Constance Shacklock sings the role of the Angel with considerable feeling and Marian Nowakowski is imposing as the Angel of the Agony and the Priest… Barbirolli here confirms himself as master of both scores.” Rob Cowan, Gramophone

“This is a very valuable release of two notable Elgar performances by Sir John Barbirolli. If you don’t have the 1957 Rome Gerontius in your collection it’s well worth acquiring, not just as a valuable supplement to the celebrated EMI recording but also because it offers the only chance to hear Jon Vickers and Constance Shacklock in this work; neither is to be missed. If you already have the Archipel set I think it’s well worth trading up and acquiring this new release because Ian Jones’ transfer does proper justice to the performance, allowing us to appreciate it much more fully.”  John Quinn, MusicWeb International