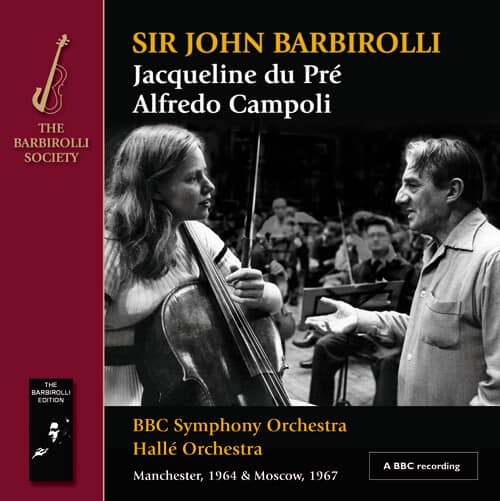 From her late teenaged years, Jacquelin du Pré was the leading cellist of her generation. She had begun her recording career, for EMI, in the early 1960s and for millions of musicians and music-lovers, her finest and most enduring recording is of Elgar’s Concerto, made in 1965 with the London Symphony Orchestra conducted by Sir John Barbirolli. Although that recording, which has never been out of the catalogues in the more than half-century since its release, there is no doubt that the choice of Barbirolli as conductor was an inspired one. For Sir John played in the orchestra at the world premiere of the work in London in 1919, rehearsed and conducted by Elgar himself. Not long afterwards, Barbirolli had also played the solo part in concert – no conductor ever had such close practical affinity with the work than he.

Such unique associations naturally gave any performance of the work under his baton an exceptional interest, and when one encounters a performance of the Elgar Concerto by du Pré with Barbirolli conducting in Moscow in January 1967 our interest is greatly heightened. Throughout, du Pré plays seemingly without effort, with consistent beauty of tone and expressive eloquence.  If Elgar’s Cello Concerto was unknown to Moscow audiences, we can hear that this utterly compelling performance left the audience spellbound.

Born in Italy in 1906 to a musical family (his father was a violin teacher, his mother a professional singer) Alfredo Campoli shared Barbirolli’s Italian heritage and English upbringing. Campoli’s career was made in Britain and spread world-wide with a series of much-admired recordings on the Decca label.

Campoli was renowned for the rich singing quality of his tone, and in this 1964 performance of the Sibelius Concerto we may witness those qualities anew from the opening bars of the work. Campoli is magnificent and backs Barbirolli’s unfolding of the musical drama to the hilt: this is a ‘live’ performance, broadcast from Salford in the BBC’s International Concert Hall series – a true ‘living organism in time’, as all great music (and great music-making) should be. Soloist and conductor together give a performance of fire and concentration, often with exciting brilliance, and extremely compelling. Campoli delivers his part without showmanship but with extraordinary inner fire and intensity, displaying a wonderfully accurate technique that makes the most formidable passages evince a range of feeling and warmth of expression that may surprise some listeners.

“The expressive warmth, effortless beauty, emotional daring and the response of the Moscow audience at the end, tell us that this is something special.”  Elgar Cello Concerto – Record Review, BBC Radio 3

“… du Pré partnering the BBC Symphony Orchestra under Barbirolli in Moscow in 1967, a fabulous performance which truly struck while the iron was hot, with quiet playing that is rapt beyond belief and a fearsome attack of the bow where needs be.” Rob Cowan, Gramophone

“… a highly individual account of Sibelius’s Violin Concerto… packs a fair wallop with some impressive spiccato bowing… the visual element [DVD] is absorbing and elevates the listening experience on to a whole new level…” Rob Cowan, Gramophone