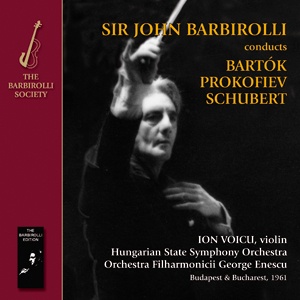 There is no doubt that such an immediately attractive work as Prokofiev’s Violin Concerto No.2 would have appealed strongly to Barbirolli (in fact, he conducted the Concerto on no fewer than thirteen occasions during his career), and with such an admirable soloist as Ion Voicu, one of the leading Romanian violinists of his day, a pupil of the great George Enescu. The performance captured during Barbirolli’s visit in 1961 is admirable – particularly notable being the ‘tick-tock’ 12/8 accompaniment in the second movement, and the remarkably-orchestrated concluding bars of that movement (solo double-bass and clarinet – which Barbirolli judges perfectly).

The Bartok Concerto for Orchestra performance, comes from Budapest – recorded just over a week later during Barbirolli’s visit in September 1961. The Hungarian State Symphony Orchestra, respond here with splendid musicianship. The work is rightly considered to be one of the 20th-century’s finest showpieces for any orchestra, as well as being a true concerto in that the musicians – individually and corporately – have to command a manner of musicianship allied to technical excellence that very few other works of this period call for.

Such a statement of intent, and such a comprehensive artistic achievement as Bartók’s Concerto displays, would have immediately appealed to Barbirolli – no wonder he performed it more than any other composition by the Hungarian – and, now in the capital of Hungary itself, there is a unique and utterly musical warmth of expression conveyed by this performance, allied to the technical excellence of the musicians, individually and corporately, that is profoundly impressive and in its way quite moving. The Hungarian players’ expression in the ‘Elégie’ has an intensity that surely reflected that which propelled Bartók’s pen across his manuscript as he strove to convey his final message. It is unique, and therefore valuable, in its combination of natural expression and moral defiance: a great performance by great musicians under a great conductor.

The BARTÓK and PROKOFIEV are previously unpublished recordings. The Prokofiev and Schubert recordings are in stereo.