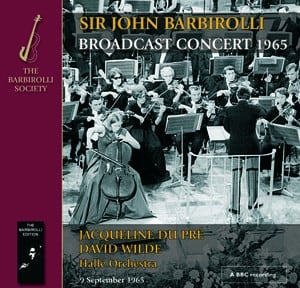 This was a televised concert from the Free Trade Hall in Manchester on 9 September 1965 and broadcast on BBC2. Each work was introduced by Sir John in his pleasant, knowledgably avuncular manner, we also have the earliest surviving recording played by Jacqueline du Pré of Max Bruch’s Kol Nidrei for cello and orchestra. This performance is of more than usual interest, for it took place a few weeks after du Pré and Sir John had made their legendary EMI recording of Elgar’s Cello Concerto with the London Symphony Orchestra.

The opening work is Franz von Suppé’s ‘The Beautiful Galathea’ overture to his two-act operetta a very popular concert item long into the twentieth-century, and especially with Sir John. César Franck’s Variations symphoniques for piano and orchestra was also a very popular work at the time of this broadcast, but is almost forgotten today. In this compelling account, the participation between the excellent soloist David Wilde and Sir John’s orchestra is almost tangible. Note particularly the fine sense of phrasing by Wilde in the more reflective passages and the genuine sense of cohesion throughout from soloist and conductor.

Max Bruch’s Kol Nidrei follows – the score terms the work as an Adagio on two Hebrew Melodies for Cello and Orchestra with Harp and falls into a flowing set of variations on two Jewish themes. Barbirolli knew the piece intimately: in his spoken introduction he describes playing Kol Nidrei himself ‘at the old Queen’s Hall in London.’ His detailed knowledge of the solo part enabled him to partner du Pré in a manner unmatched by virtually any other conductor on record. Jacqueline du Pré’s account itself is of the very finest artistry. It is fully expressive, tonally incomparable and the combined sensitivity of soloist and orchestra is profoundly moving – as the subsequent audience applause indicates. Du Pré and Barbirolli’s combination in Elgar’s Concerto a few weeks earlier had surely forged an unbreakable interpretative bond between soloist and conductor.

Finally, a brilliant performance of a brilliant work – Rimsky-Korsakov’s orchestral showpiece, Capriccio espagnol. In Sir John’s introduction, he disarmingly let slip the extraordinary fact that he had met Rimsky-Korsakov’s son in Leningrad in 1935 – a viola-player in the orchestra – and one can well imagine the empathy between interpreter and creator, for there is a wonderful cohesion, sensitivity and brilliance in the orchestral playing of quite outstanding unanimity. The entire work is brilliantly played with full and natural character – not merely treated as some kind of virtuoso showpiece. Here is a great interpreter and orchestra at work, and, with distinguished soloists, creating an hour-long television concert of classical music capable of captivating listeners more than half-a-century after it took place.