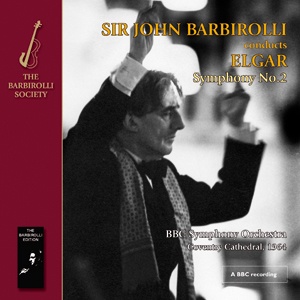 What remains so compelling in this performance of Elgar’s Second Symphony from 1964 is the essential ‘oneness’ of Barbirolli’s conception, by which is meant that attentive listeners can follow his deep understanding and unfolding of this masterly score from first bar to last. From the time of the first appearance of both of Elgar’s symphonies, the profoundly organic subtleties which run through each work must be grasped and acted upon in performance by any conductor who chooses to essay them.

It must be said that even performances which have received high critical acclaim are often not invariably founded upon such understanding: Barbirolli’s are, demonstrably. His approach has led some critics to feel that – in this symphony, particularly – he is more ‘flexible’, more emotionally searching, than other interpreters who concentrate mainly (or so it would seem) on presenting ‘the bigger picture’, without realising that a deeper grasp of Elgar’s organic unity within this demonstrably great work can give the interpreter finer degrees of insight into the myriad inflexions of expression, and therefore interpretation, that appear to pass other conductors by.

The emotional heart of the work – its essential ‘message’ if you like – lies in the quotation at the head of the score: ‘Rarely, rarely comest thou, Spirit of Delight’ – from Shelley’s Invocation – almost literally so, no doubt, when one considers that no fewer than six of Elgar’s closest friends had died during the preceding twelve months of the composition of the Symphony.

…… the corporate playing of the BBC Symphony and the rich acoustic of the (then) recently-consecrated Coventry Cathedral combine to reveal the genius of the composer’s art anew. As an interpretation, Barbirolli’s account is exemplary: throughout this exceptionally difficult score, he has the full measure of the work – and it remains an object-lesson for later conductors. Every phrase, from the exultant opening, through the memorialised slow movement, the Scherzo’s astonishingly malign outbursts to the contemplative acceptance of the final rounding of this symphonic life with sleep – Barbirolli is quite masterly and always deeply expressive; this is a great performance.

“….. Barbirolli is all warmth and ardour, right from the works swaggering Heldenleben-style opening, through the noble Larghetto and the tumultuous Scherzo to the work’s tranquil if questioning close. It’s a real performance, this, emotionally engaging and universal in its appeal, its outreach far beyond the ‘English music’ designation that Elgar himself disliked.” Rob Cowan, Gramophone.