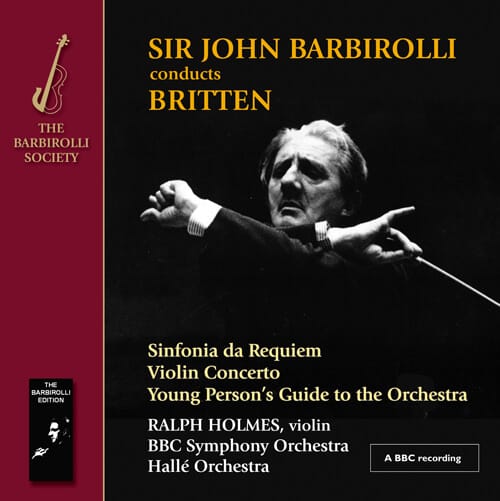 When war in Europe erupted in September 1939, Barbirolli was not the only notable British musician then resident in the United States. The 26-year-old Benjamin Britten was living in New York. Then in 1942 Britten returned to England, but the three years he spent in America had proved greatly significant for the brilliant young composer. During that time, Britten had received a number of important commissions and had enjoyed notable premieres, including those of the first two works in our collection – Sinfonia da Requiem and the Violin Concerto – which were first performed by the New York Philharmonic under John Barbirolli.

Britten’s Violin Concerto was premiered on 29 March, 1940. Praise is certainly due to Barbirolli for accepting this masterly score for performance; it had been turned down by Serge Koussevitsky in Boston and Eugene Goossens in Cincinnati. Thirty years later, at the Royal Festival Hall in London, the conductor’s command of the score remained absolute. This ‘live’ recording features the soloist Ralph Holmes who plays the final 1958 edition of the solo part. In the final moments, one can just make out Barbirolli saying quietly to his soloist, ‘bravo’.

Our collection is completed with The Young Person’s Guide to the Orchestra, subtitled Variations and Fugue on a Theme of Purcell. It was conceived in 1945 to form the major part of an educational film about the instruments of the modern symphony orchestra, yet Britten’s complete finished score is also a continuous original composition, fulfilling the original purpose as well as forming a separate concert work. The Young Person’s Guide inhabits the opposite emotional tenor from the Violin Concerto and the Sinfonia da Requiem: pleasant, outward-looking, educational, enjoyable and profoundly musical: a guide to the orchestra for listeners of all ages, as we hear in Barbirolli’s affectionate account of this quite masterly score. This recording with the Hallé Orchestra is from 1967.

“… Sinfonia da Requiem had a particular appeal for him [Barbirolli] and his reading of it maximises on the drama and a sense of the numinous…. Britten’s Violin Concerto, a first release, features Ralph Holmes, a fine colourist who specialised in 20th-century music and, tragically, died when he was in his late forties. Holmes’s approach is pure quicksilver, his perceptive handling of the concerto’s central Passacaglia bringing to mind the parallel movement in Shostakovich’s First Concerto.” Rob Cowan, Gramophone

“Barbirolli’s soloist is Ralph Holmes (1937-1984) and this performance is a major addition to the fairly slender discography of a fine artist who died tragically young…..   Barbirolli reminds us what a splendid accompanist he was while Holmes gives an assured and committed account of the fiendish solo part – he’s masterful in the challenging cadenza at the end of the second movement. The essence of the concerto lies, however, in the concluding Passacaglia which occupies nearly half of the full length of the work. This movement contains music of searing intensity. Holmes and Barbirolli do not disappoint; both bring out the extraordinary emotional turbulence in the music…..  Just before the applause breaks out you can hear Barbirolli say “bravo” to his soloist. It’s very good news indeed that this previously unpublished recording is now available.” – John Quinn, MuicWeb International