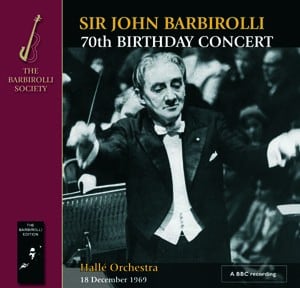 In 1968, Barbirolli had been directing the Hallé continuously for a quarter of a century – a tenure longer than that of any of the orchestra’s conductors before or since (other than that of its founder Sir Charles Hallé). The following year, 1969, marked Barbirolli’s 70th birthday, and for the conductor’s ‘birthday concert’ the music played was his personal choice. Barbirolli selecting three works that must have been of great personal significance.

Elgar’s Introduction and Allegro was the one work of Elgar’s that Barbirolli – himself a string player who had played the composer’s then-new Cello Concerto at the outset of his career – had taken as his own. In the course of his recording career, which in 1969 spanned almost 50 years, Barbirolli made no fewer than six commercial recordings of the Introduction and Allegro.

During his career, Barbirolli conducted all nine Vaughan Williams symphonies and it was the Sixth that he gave 69 performances in twenty years. It is not generally known that Barbirolli was the second conductor to perform the work: three months after Boult’s premiere, Barbirolli introduced the symphony to the Cheltenham Festival. Vaughan Williams’s then-new symphony had made a deep impression on Barbirolli and his choice of the Sixth Symphony for his 70th birthday programme means we have a magnificent reading of this work for posterity.

Sir John’s birthday concert ended with a profound performance of Beethoven’s Seventh Symphony. Throughout this performance, Barbirolli’s grasp of Beethoven’s tonal plan and of the work’s emotional expression is of the highest order, fully supported by the commitment of ‘his’ orchestra. We must be grateful this rare recording survives, adding to our understanding of Barbirolli’s interpretative qualities.

Barbirolli’s sudden death took from the world a very great conductor in the full flood of his performing career; his many surviving recordings continue to attest to his interpretative genius – including this release, which captures so well the sense of occasion, reinforced by the inclusion of tributes paid to him on his birthday. To hear such heartfelt comments from the Hallé’s long-term leader, Martin Milner, alongside others from his biographer Michael Kennedy, Jacqueline du Pré, Daniel Barenboim, a long-time audience member as well as an insightful interview with Barbirolli himself, make this release in the 50th year of his passing one which ideally captures the conductor at the height of his powers. It is a unique set in every way.